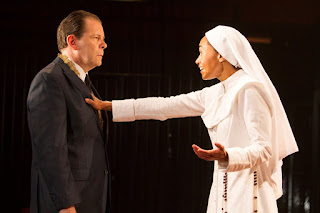 MEASURE FOR MEASURE
BY
WILLIAM SHAKSPEARE

DIRECTED
BY
SIMON GODWIN
AT
THEATRE FOR A NEW AUDIENCE: POLONSKY SHAKESPEARE CENTER

Measure for Measure is considered one of Shakespere's, "PROBLEM PLAY"  as well as a comedy and here at the theatre for a young audience it seems  more inclined towards a comedy as directed by Simon Godwin in a light-often laughter filled  manner even at some serious moments such as a beheading of a character. The production is done in contemporary dress and in a style quite unusual such as entry to the theater through a passage backstage designed as, "Mistress overdone's brothel" complete with sex toys and dim red lights creating an atmosphere for  sex and sin.

The play deals with issues of morality, responsibility of the state towards the seriousness as well as the lightness of crime, about faith and about justice.
In the opening scene we see the Duke Vincentio (Jonathan Cake) lying on a lavish table covered in white perhaps exhausted from partying and almost sick of his own lack of morality (he is shooting up
heroin) decides to shake up things by taking a vacation and putting Angelo (Thomas Jay Ryan ) an unbending, uncompromising and moralizing deputy incharge of the affairs of the State.  Angelo puts morality ahead of  the law, shuts down the brothels and give orders of grave punishments such as death for  a very light crimesuch as making a woman pregnant. The culprit is Claudio ( Leland Fowler ) the brother of Isabella (Cara Ricketts) who is training to be a nun  and is a virgin.

Duke Vincentio in the meantime doesn't leave and disguise himself as a friar and watches as well hatches many sub-plots to deal with the sever and frigid rules created by Angelo.
When Isabella finds out that his brother Claudio has been orderd to die by Angelo for making his woman pregnant she decides to meet Angelo to  beg for mercy and pardon for his brother.  The least flexible and morality ridden Angelo who despises the word, mercy agrees to pardon Claudio if Isabella agrees to give herself to him.
Isabella in a great speech tells him that she would rather put chastity above his brother's life.

Isabella has an encounter with the fake friar (Duke Vincentio ) who hatches a plot to send
another woman whom Angelo had promised to wed and abandoned to share his bed hinking its Isabella...  Are you still with me?

Measure for Measure is full of sub-plots thus leading itself towards a bit of comedy as well a bit of a problem but the performances here helps the play move along brilliantly.  The best performance is by Cara Ricketts as Isabella.  She is majestic and handles the language superbly.  She is one of the best Isabella I have ever seen.  Jonathan Cake as the Duke is also very good and delivers with gusto.  Thomas Jay Ryan as Angelo is meticulously stern and rigid.  He is so good in his rightousness of moral belief and hypcricy that eventualy invites our hatred towards his character.

The production as a whole is lots of fun, it has a lot of diversity and accents and I think a great director like Simon Godwin might be the only one to take such challanges. He is an innovator for mixing classics and contemporary themes with such confidence and he doesn't disappoint.
Also to his credit as a director the language here is crisp and clear which is a joy.

Theatre for a young audience is a blessing in this town because thheir productions are always
courageous, innovating and superb always  showcasing great talent.

Posted by arts international at 6:16 PM