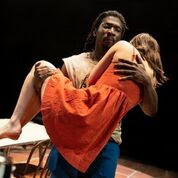 August Strindberg, Swedish playwright, 1849--1912 wrote plays dealing with the most disturbd
and difficult relationships between lovers about sexual anxiety, lust, misplaced passion, troubles between husbands and wives, not ordinary troubles but desperate and pathological troubles.
Two of his plays, MIES JULIE, (MISS JULIE) and DANCE OF DEATH dealing with above mentioned desires a it's difficulties are being produced by CSC, classical stage company till March 10.

'MISS JULIE' IS NOW TITLED, 'MIES JULIE' adapted by Yael Farber and directed by Shariffa Ali
is set in South Africa after apartheid.  Miss Julie is a very haunting, dark play which deals with class
system, master and servant relationships and it's enormous tensions.  It's like upstairs, downstairs situation...and when sexual passion and desire between the two classes intermingle for whatever reason, attraction, loneliness, control, pathology, the result is going to be losts of smoke, fire and then eventual destruction. It's a sad and scary play because it reveals again and again the status of the occupants of those house hold. It's like society is telling you to, "Know your place and don't cross the boundries"  In Miss Julie the characters do things which  have devastating results.

In original Miss Julie, there are three characters, Julie, the rich man's spoiled and controlling daughter, Jean, her father's servant and Christina, a cook and Jean's fiance. The action takes place in Jean and Christina's kitchen downstairs.

In this new adaptation by Yael Farber, the play takes place in Karoo, South Africa and Jean is now John, a black man whose'ancestors were slaves.  The charcter of Christine has changed from John's fiance to his elderly mother. With these changes, the concept of the play utterly changes.
From sexual desires and sexual frustration of the upper class spoiled young Mies Julie has changed
towards race and the tragic history of it's slavery. With this drastic change the play did not work for me though the actors tried their best but it was a different concept and I kept thinking of the original
play all along. The ghost of John's ancient slaves walking around a few times didn't help either.

'DANCE OF DEATH'
Translated by wonderful Irish playwright Conor MacPherson and directed by Victoria Clark is
about a married couple, Alice (Cassie Beck) and Edgar (Richatd Topol) an army officer who is stationed on an island. They live in a house which was an army prison in the past.  It's a toxic love-hate relationship, more hate than love in which the husband and wife throw insults at each other like a fast and furious tennis match. Then there is another character, Kurt (Christopher Innvar) who is Alice's cousin and perhaps a lover in  her past who surprises the couple by showing up after many years. 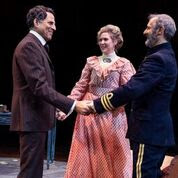 The good thing about dance of death is that it has become very jovial and funny and light and that is also the bad thing about the play.  Though we as the audience members enjoy the show and laugh frequently but ones who know Strindberg's work well miss that ferociuos tension in the relationship.  They have been married for 25 years and have been hurting each other for such a long time and sometime one wonders about the waste of lives lacking basic happiness which has no joy in it.  But in this translation I felt as if I was watching a charming comedy and the couple was just kidding and teasing each other out of love and for some fun.  It's fun but the darkness and fire of their relationship is missing. Strindberg was a dark, disturbed writer who had incredibly difficult relationships in his marriages and he revealed lots of personal stuff in his work.  I recently read a trilogy of his plays called, "Road to Jeruslam" in which it was revealed that it was quite autobiographical and it dealt with his horrendous struggles for a happy marriage and relationship with his children beside many other serious problems he encountered throghout his life.  Strindberg was not a jovial writer.
But it was still fun to watch dance of death for a change.
Cassie Beck was excellent.


Posted by arts international at 2:09 PM