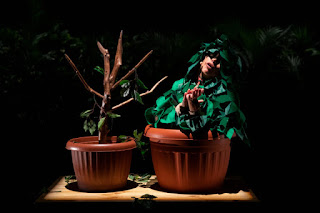 Chilean Director Manuela Infante deals with the Plant Intelligence and communication in this fascinating play, Estado Vegetal. The philosophy of plant intelligence and it's relationship with humans and other plants is based on Philosopher Michael Mardar's real world research.
The play is very experimental and at times the script is confusing.  There are some unexplored ideas
that, " stillness is better than movemments." and, "The trees have stronger will to stand still in the face of danger." Well! we also believe that to live, we have to move, motion and life are also connected.  But I do believe that the silent things such as the plants, trees and flowers do speak to us somehow by remaining silent and still at the same time.

Trees and their branches move with the wind, blossoms fall down on the ground when the rain and wind comes and cover the green grass with their beautiful magenta colors, they hiss and weep at their early fall.  So we do believe somehow that there is some kind of dialogue going on between the human beings and flora but to stage this concept and bring it to life to live audience can be difficult but not in this play because there is a stunning performer, Marcela Salinas who is so enormously talented that and fills the stage with her energy, her dedication and her craft that we forget all the philosophies and just watch her brilliance throughout the play.

This is how the experimental and dreamy story of Estado Vegetal goes. There is a motorcycle
accident crashing into a tree. Marcela Salinas, the actress plays multiple roles as the narrator, the grief
stricken mother of the young man who crashed into the tree, the manager incharge of green spaces, a gossipy aunt and a small girl who is a bit handicapped and mentally slow.

Salinas, a superb actress who portrys all these characters fully with her voice, her movements and
her facial expressions.  The play, vegetative state implies in a very poetic and visual way the advantages of plants and trees and their life compared at the same kind of level as people.
The play seems confusing but fascinating to watch.  It has great visuals and wonderfully complex sound design.  Salinas uses a looper pedal, records her own voice and play it back in different volumes. She arranges and rearranges the plants and at some point transform into one.
She is constantly moving around never out of whatever character she is playing.

The show is a very different but very satisfying because of the actress Marcela Salinas.  Her energy, her passion, her voice and her deep conviction about the characters she is playing is just marvelous.
Without understanding every bit of the script,  I really enjoyed the performance, the set, the sound
and the presence of so many green and beautiful plants on stage.

Posted by arts international at 7:58 AM