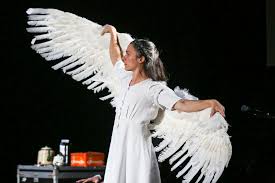 NEXT WAVE FESTIVAL
AT BAM

The very first scene of this fascinating play has a man with a rope tied to his neck which is tethered
to a cinder block.  The man moves around in circles and makes noises as if he had been turned into
a goat.  At least that's how I saw it and immediately related this scene to the Irish suffering and persecution for thousand upon thousands of years.  For me that was a metaphor for human torture
in Ireland.

This man/goat is played by Mikel Murfi.  He is only in his underwear paces around agonizingly.
Then after a while three men dressed in black clothes and black hats come near him and dance around making the
so called animal extremely un-comfortable.  As they come too close to him he is extremely frightened and he cries and make shrilled noises, then the three men called, Watchers grab hold of him, lay him down, pour water on him (It made me feel like water torture) but actually they were giving him a mini  bath and then giving him a tough massage with red towels, the color of blood , dress him up and make him sit down on a chair. Then he asks for a cup of tea.  "I won't say a word until I have a cup of tea."  I loved that, he must be so cold.  He starts to tell us a story of Jimmy O' Reiilly (Alexander Leonhartsberger) who had been extremely depressed since the death of his father and his mother who in a Wheelchair  Nancy ( Elizabeth Cameron Dalman ) gives him his late  father's loaded gun for his 36th birthday after her repeated failed efforts for him to get out of his sunken state and meet some woman.

This Swan Lake has no resemblance to Tchaikovsky's Swan Lake but it has the most incredible music
by the Dublin band Slow Moving Clouds. It's performed live by three musicians.  It is hypnotic, and stirring with an Irish dirge which creates incredible sense of desire as well as sadness of the incompletion of that very desire. I looked to buy a CD of this haunting music in the lobby afterwards but there was none being sold. While I was listening to this beautiful music which creates a feeling of longing, an ever lasting longing, I went back to the first scene about my concept of Irish suffering because this music and this performance/dance and theater piece is exactly about that.
it has the feel of morality tale of religious persecution, subjugation, oppression of people especially women and the graet human spirit of survival.

A priest comes into the story. The priest played by Micheal Murfi assaults a young woman Finola,
Rachel Poirier, a wonderful dancer and the star of the show) and then being afraid that she will talk,
puts a curse on her and her three sisters to turn into, "filthy Animal."  Now they live at the edge of
the lake and these are the Swans in this play...young women in white dresses, white wings and wearing black wings after the priest's curse. Their movements and their dance including the men  as well are just priceless.

One evening Jimmy takes his gun out and goes to the lake to kill himself and at that exact moment
a woman/swan appears suddenly to prevent him to kill himself.  He falls in love with her, its Finola
and they dance together, a dance of joy and liberation and freedom at last.  There are many highlights
in this majestic ballet/dance/performance but this one is the most heartfelt because by this time we want something beautiful to happen for Finola and Jimmy.

This Swan Lake is difficult to describe in simple terms because it encompasses so much history, folklore and mythology in 75 minutes.  I wish it went on and on especially the most incredible and joyful last scene, the last dance in the show with tons of beautiful white goose feathers also dancing with the dancers and falling like pure white snow flaks all over the stage and all over the first few rows of the audience.  It was a moment to rejoice and put all the anguish, oppression and history of Ireland behind.

Michael Keegan-Dolan is one of the most fabulous choreographer/writer and director I have encountered.  This is his first work I have experienced and it won't be the last. The whole cast is marvelous, very talented and appealing. Rachel Poirier is superb. A thrilling experience for me.
I also love everything Irish.  I was in Dublin three times this year and I breathed poetry, literature/
humor/pain/joy and enormous history every minute and kept going back...Irish have great humor and great poetry and a sense of survival  and great music in them and all of it is  in Micael Keegan-Dolan's Swan Lake/Loch na hEala.

Posted by arts international at 11:41 AM