UNDER THE RADAR FESTIVAL AT THE PUBLIC THEATER 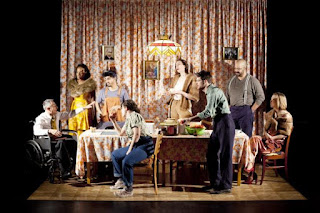 UNDER THE RADAR FESTIAL AT THE PUBLIC THEATER
MINOR CHARACTER

Reviewed by
Bina Sharif for artsinternational

Checkho, one of the greatest Russian dramatist and a writer of short stories has been translated
in many languages.  The New Saloon takes at least six English translations of Uncle Vanya and
experiment with it.  The experiment is a lot of fun in a very confusing way. Many characters are played by different actors of different race and gender with very little change in costume except a mink look alike stole for Yelena in many scenes. Yelena, the beautiful wife of the intellectual professor, Serebryako is being played by three actors, Medeline Wise, Rona Figueroa and Ron Domingo.  All three of them are on stage many times repeating the lines of their character in different translations and the effect is many times startling in a very good way.  Uncle Vanya is considered a tragicomedy because there is hidden humor in it but all the characters in the play, Vanya as well as in Minor Character are unhappy yearnig for somethin unreachable. Yelena is being asked a profound question in all the different translations , "Are you happy?" and her answer always is, "NO"And that is enough to realize how human these nerous, anxiety stricken, unhappy people are.

And Sonya, the hard working niece of Uncle Vanya and the daughter of the professor Serebryakov
declares herself, "Not pretty" "Very Plain" "Not attractive" in all translations. So no matter which language she expresses her despair of her meager existence in, she seems fragmented and a wounded person like the rest of the characters. They are all seeking something without having the awareness of what is it that they are after. I guess it's happiness they are after like the Citizens of 21st Century
thus making Chekhov, the most classical as well as a contemprary playwright.

Only character in this play who is in total defiance and is a control freak is the professor.  He complains about his gout and ill health but not with any kind of despair but with high volume of shreaking anger and ego. He is the most selfish in his material and emotional needs and wants a huge sacrifice by every one especially Sonya and Uncle Vanya.  Played by David Greenspan, (actor/playwright) who enjoys being on stage like no one else, is pretty good in the role

All actors are dedicated and very funny.  I think this experimental production by New Saloon who took a chance on a great classic has worked but I wish it was a bit longer and had more of Chekho's
beautiful monologues in it. But still it has amazing humor and what we learn is that the core meaning of important words remain the same no matter which translation of great works is being used.
Posted by arts international at 10:13 AM