THE LAND OF PROMISE

THE LAND OF PROMISE

An evening, a celebration of the Scots-Irish, the original settlers to America.
The Migration started in 1717 and these Immigrants became the greatest pioneers,
patriots and originators of a great revolution and today they are in millions and still contributing
in every aspect of American life.

The evening celebrates their migration, their contribution, their innovation and their enormous skills in every sphere of American life and its culture with dance, music, song and story telling. 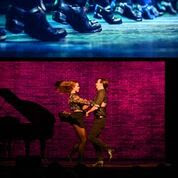 Both the writer and the director were able to tell this fascinationg true story withe help of a wonderful cast. The Narrators, Orlagh Cassidy and Colin Ryan were able to make it very clear how the Scot- Irish presence and influence starting from 1717 uptill now in America is woven deeply in America
and every aspect of its history.  So many settlers influencd the finance, politics and culture and one can see the results of prosperity.  Even the very first president, George Washington had scot-Irish
ancestors and the participation of many amazing cultural figures such as Margrete Mitchell, author of "Gone with the wind" , There was a woderful scene from the movie, Viven leigh and Thomas Mitchell talking about the importance of land and how one should hold on to it because the land is the only thing which matters, relevant to the settllers story who,  many of them, Scots- Irish from the South who cultivated  the land and participated in many other amazing achievements.

The scene from, "Gone with the Wind" Added an incredible charm for me because I was sitting next to my partner,  Kevin Mitchell Martin who is the grand nephew of Thomas Mitchell and that particular scene gave him immense pleasure, joy and Pride.

The whole cast which included singers. dancers, comedians, muscians were just amazing.
Niamh Hyland, singer and a song writer was very moving with a melodious voice
so was Garrett Coleman, a two time solo World Champion in Irish Dance and Caitlin Golding who started dancing at the age seven and is still dancing and is just enthralling. Who on this planet doesn't love Irish dancing? Irish dancing is just the best and I throughly enjoyed their dance.

The whole evening is lots of fun because it has so much variety, the words, the songs, the dance, the music and the most important is the story of Migration of the Scots-Irish to American soil and their amazing accomplishments and for me it is of great value because I never knew such details of the early settlers and their incredible positive influene in every field in American history.  I am for sure
much better informed after this wonderful experience. 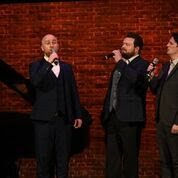