THE TRAGEDY OF JUIUS CAESAR 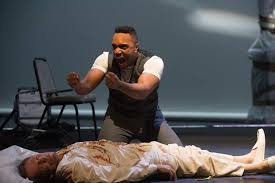 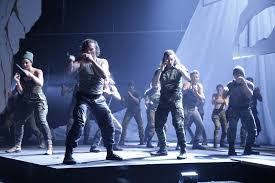 A vibrant and extremely energetic production of The Tragedy Of Julius Caesar at Theatre For a New Audience just opened. It's taking place in Rome but actually its make believe Rome because the production is staged as a contemporary and experimental version of Julius Caesar.  There are no togas.
All acttors are dressed in pants and Caesar in a suit, (dressed to be killed). In the very first scene of the play actors enter with thundering music (Actually very good music and sound effects) in masks and greyish skirts. They are  protesting against the tyranny of Caesar, (we are told that
Caesar is a populist and a tyrrant?) Many times I have not felt him to be so because maybe he dies too soon, rather killed too soon and its not because the actor playing Caesar doesn't do a good job, on the contrary, here Rocco Sisto playing the part is absolutely the best.  I have seen Rocco Sisto in many plays and he has never disappointed me.  He has a regal personality and a wonderful deep and theatrical voice. When I found out that he is playing Caesar I was saddened because I knew he isn't going to be on stage for long. Not that the rest of the production is not entertaining, actually its quite good looking visually, blood excluded. What I am trying to express here is that I actually enjoyed the play very much and I usually do not like Classics to be done in modern dress to represent the present.

Another thing I do not like or agree with is that some critics comparing recent productions of Julius Caesar with Trump era.
Trump and Caesar are Centuries apart and its a cheap comparison and wishful thinking that Trump  could be gotten rid of somehow just like Caesar. To watch a great play by Shakespeare and thinking about Trump at the same time is a pity to say the least but lets get back to Julius Caesar.

As I said earlier I love this play, actually I love Shespeare's tragic plays much more than his comedies,
Am I a morbid person? You can say that but I go for the language and the laguage here was pretty
well spoken so I forgot about the sheetrock walls cracking and plaster falling down, actually the cracks in the walls represented crumbling republic and its downfall.  The scenic design by Sibyl Wickersheimer was quite effective so was the sound by Paul James Prendergast but the best thing was the choreography by Erika Chong Shuch. Most of the time in theater as well as in the movies the battle scenes are a laugh but here it was amazing like a beautiful sculpture still moving slowly in a dim light.

So this is how the tragedy of Julius Caesar goes, (A bit late for me to tell the story but never mind)
Caesar's senators conspire one night to murder him before he is knighted as a king...rumor has it that he might bcome a king and then will have the power of a god. So Cassius makes a plan of murdering Caesar and provokes the other conspiratots including Brutus who in the beginning is reluctant but later on join the others and when Caesar appears in a relaxed and jovial manner gets brutally stabbed by all of them and the biggest surprise for Caesar is that Brutus is also involved.

Caesar's wife Calpurnia (Tiffany Rachelle Stewart) warns and beg Caesar not to go to the senate this morning because she had an awful dream about his statue being stabbed and blood coming out of of it like a fountain but alas he didn't listen to his wife, (men usually don't listen to their wives)  Brutus did the same.  His wife Portia wanted him to share with her his recent brooding mood and why was he behaving roubled but he shunned her off as well. The warning of danger was also given to Caesar by the soothsayer, "Beware the Ides of March" but was ignored and then the murder was done and even after Mark Antony's (Jordan Barour) passionate speech to turn the mob against the assasins, the Republic eventually falls apart and "Peace, freedom, liberty" is not reborn.

Jordan Barbour as Mark Antony was good but could have used more passion and fire in his speech,
All actors were believable and held our attention but what I liked the best beside listening to Shakespeare's great words was the visuals and the beautiful choreography and the lighting design.
This production of Julius Caesar is much more enjoyable than a few I have seen in the recent past.
Theater for a new audience and its productions have never disappointed me.

Posted by arts international at 6:30 PM