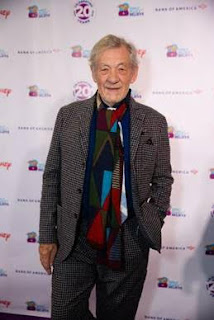 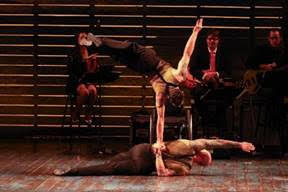 ONLY MAKE BELIEVE is a non profit organization that creates and performs interactive
theatre for children in hospital, care facilities and special education programs throughout New York and Washington. Dena Hammerstein started it in the memory of her late husband James Hammerstein.

Beside the event's entertainment value this event was the most Important evening on Broadway I have ever attended.  To be honest I had no Idea of Only make believe program and boy am I ashamed and thrilled as well to be part of one of the most moving and human event which has been helping children with chronic illnesses and disabilities and introducing them to theater where actors and singers come to them and help them to experience joy and happiness beside their misfortune.  I think Dena Hammerstein deserves all the awards and thanks for doing such an essential
deed and many other people who are in charge of all the units in those facilities which takes care of those lovely children all over the city and in Washington.

There were so many wonderful speeches, uplifting comments and songs from different Broadway shows, such as, book of Mormon and the band was amazing.  But the most moving  for me was the documentary of children in a hospital unit enjoying the various acts performed by the actors.
What a great concept to bring theater to the sick children and children are not analytical and  theater critics, they are just innocent children who cherish those moments of fun, excitement and costumes and the colors and the music.  All that makes them dream of a better morning, I am sure of that.
So in this short life the ones who are able and fortunate enough to help the sick and disabled are blessed as well.  Just to have an image how to help the children in a hospital unit where the sick might at times lose hope, to bring hope of another beautiful day in their lives.  I am so impressed and thankful to Dena and every one else involved to create this organization and to be invited.

Besides many other high lights of the evening, to see Sir Ian Mckellen in person was just a moment of great thrill.  He is one of the most incredible actor alive.  I try to see everything he does but it's not possible but whatever I have seen, I have never been able to take it out of my mind and my heart.
Wild Honey by Chekhov,  at the National Theater of London, No man's land by Pinter, Waiting for Godot by Beckett, on Broadway to name a very few. But he has done thousands of shows in his long lasting career and he was going to perform his one man show which he cancelled in London for one night at the Hudson Theater in NY and donating the money to Only Make Believe.  Amazing generosity of spirit.  Another high light was the two acrobats, one of them disabled perform with
perfection and energy and spirit.  Amazing performers as well.

On a very personal note, this evening brought back lots of memories for me especially about children.
I have to confess that I am also an MD from Pakistan and I did my one year residency in Pediatric
hospital in Lahore Pakistan. I loved those children and would spend hours upon hours with them
in the hospital ward even when I was off duty. When I saw the film of those children enjoying
the theater which was brought to them it made me sad and happy at the same time.  Sad because I didn't practice medicine in America but happy that I am involved in all aspects of creative theater. At times I have felt guilty in the past for abandoning those children but the night of Nov 4 at the Schoenfeld Theatre I felt as if I was contributing to Only Make Believe myself by being in the theater and one day maybe I will go to those hospitals and tell the children some joyful stories.

Posted by arts international at 8:27 AM