THE GREAT TAMER: A DANCE/PERFORMANCE PIECE AT BAM, PART OF NEW WAVE FESTIVAL 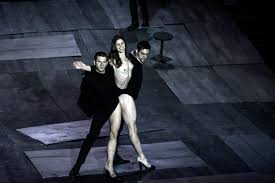 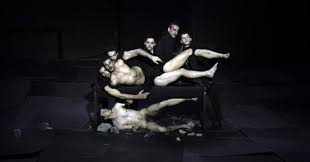 THE GREAT TAMER:  A DANCE/PERFORMANCE ART PIECE AT BAM.

THE GREAT TAMER
CONCEIVED and DIRECTED
by
DIMITRIS PAPAIOANNOU

difficult because its such a complex, multilayered performance encompassing life and death and all

that happens in-between.  It's about mythology, mortality, physicality, spirituality and the fragility

On a vast slanting steel grey stage made of removable black and white sheets, this complex art/dance/

A man dressed in black walks on stage and slowly starts to take his clothes off. Then he lies down as

if he is on the roof of his house to get some sun.

with a very lightweight white sheet.  Then the third man comes and picks up one of those removable

panels and with great ability shake it a bit and then let it drop.  That makes the sheet covering the

naked man floats away.  This activity is repeated a few times and is brilliantly done and is

Many more realistic, surrealistic and metaphorical sequences occur.  The brilliant cast of dancers,

acrobats, gymnasts and performance artists keep going tirelessly with such agility that one marvels at

the excellence and the amazing power of human body in all it's forms, in it's suffering, in it's joy and

the spirit of adventure and surprise.  Most of the time the men and women are nude without a hint

The do the most difficult movements in extremely vulnerable positions takes a lot of expertise.

They open the panels and dig underneath as if they are preparing for a burial.

They open another panel and discover water, in which they bathe. They even find body parts, an arm

sticking out, or part of a leg and now and then our concept of their location changes.

The Great Tamer is very philosophical and that makes sense.  After all it's being created by a

innocence. Sometimes one feels as if grown up children are playing games and having fun.

in life which bogs us down,  depicting the delicate moments of un-predictable and unbalanced life.

and throw them away. Everything seems meaningless and immensely serious and ominous at the

The performers, men and women don't seem human in their physical power and agility but

superhuman and then they lose balance and fall apart right in-front of our eyes.

The whole show is an unending enjoyable metaphor.    Things are visible as well as hidden.

Meanings are obvious and complex beyond our comprehension.

on the sound track.

There are impressions of classic European art.    Chorus of actors add white collars and instantly

lesson."  Then they feast on human intestine which they have pulled out during the dissection.

our imagination and we create our own stories and how many shows can make you so creative,

at the same time.  The last moment in the show has total disintegration of a skeleton mounted

of breathing.  This show makes us aware of, "Breath." The last breath,  before we are no more.

Not to be gloomy but this awareness is essential.

Posted by arts international at 2:40 PM