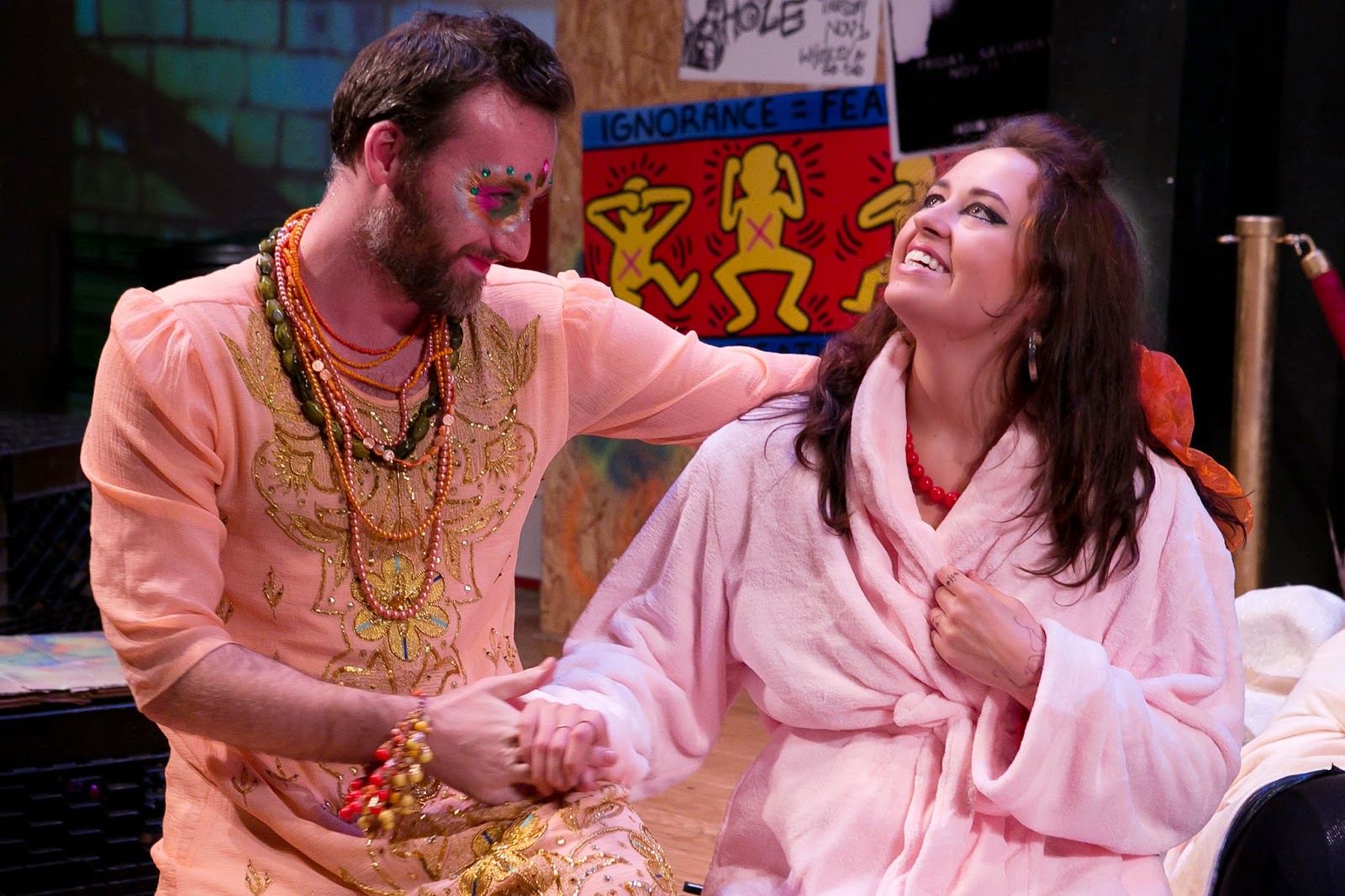 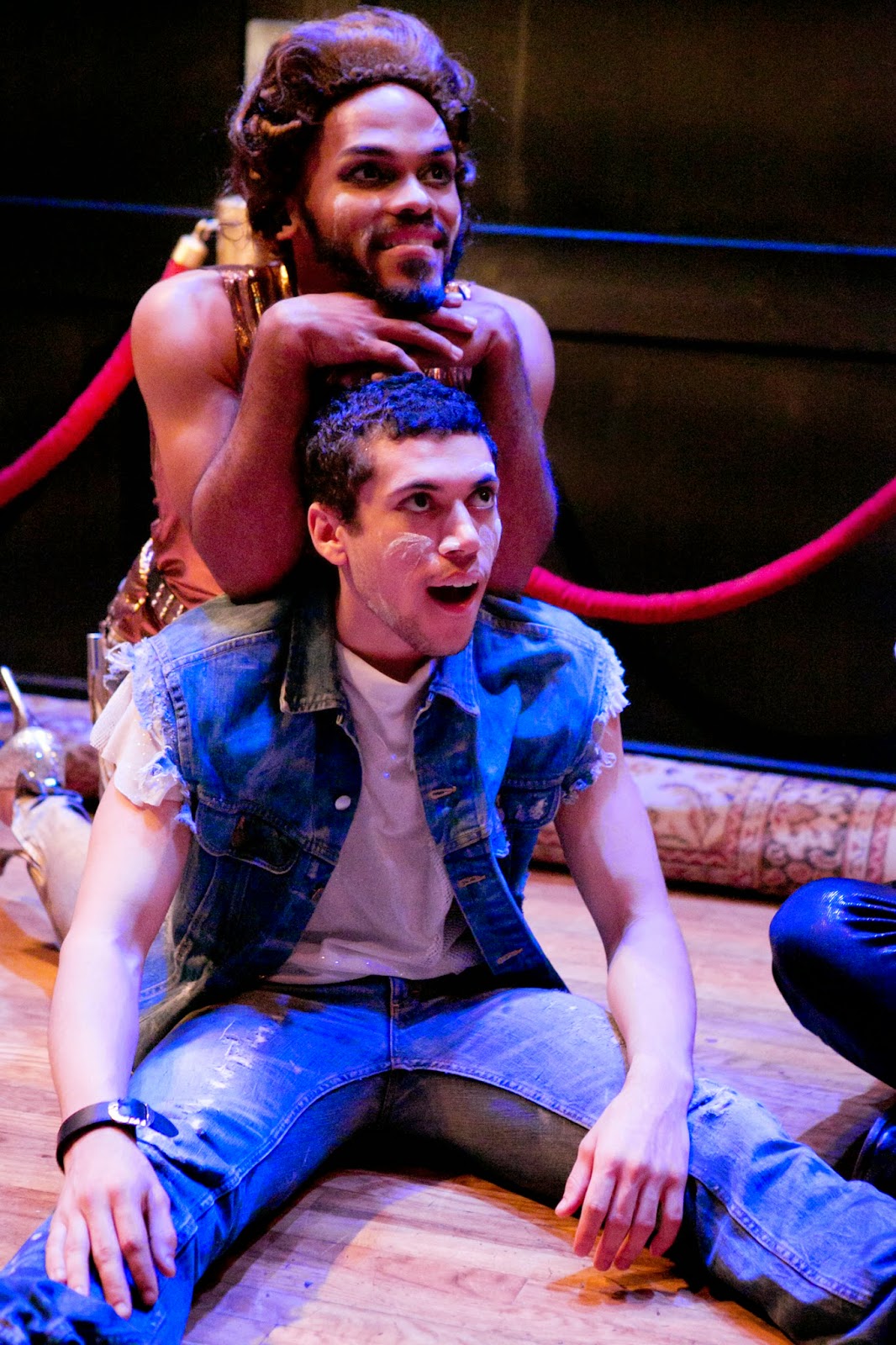 Its 1989.  We are in a Greenwich Village Gay Club on Halloween.
There are a few men and women handsomely dressed lying motionless on the floor
for quite some time.  They don't move, they don't breathe.  Are they resting from a long evening's
pleasures or are they dead after the consumption of fun, sex, drugs and passions?
We are not sure yet.

Then enters a Krishna type, finely dressed in gold and orange and glitter ( Matthew Dalton Lynch )
as  George Harris 111/Hibiscus (1949-1982 )  He is the one who put a flower into a rifle during the
Vietnam War.  He livens the room with his dancing and then who walks in?  Cookie Mueller (1949-1989) ) A party girl and John Water's actress with a cane ( fabulously played by Olivia Nice)
Now we know that the party goers are bringing the dead back and every one on the floor rises.

The party begins, lots of kissing and lots of hugging and mingling and laughter.  It makes you feel you want to get out of this awful 2014 where the fun has been replaced by constant news of war and the demise of East Village with nothing left but condos and boring people in it with no style, no sense of
fashion and no humor at all.  We are still waiting for something concrete to happen and all of a sudden
a play called,  FRANK a 1966 tragedy starring Frank O'Hara (brilliant Adam  Wennick ) starts to
unfold and that's when a sense of real theater and the impact of great poetry happens.
The mood becomes solemn, poignant and sad.  Frank wrote Meditations in an Emergency and he used to scribble poems at his lunch break which became Lunch Poems. He had a tragic death due to a car accident.

This part of the evening was my favorite.  Beautifully recited poems by Adam Wennick as Frank
were very touching and soulful.  Bello Pizzimenti as Joe LeSueur ( Frank's room mate and  lover
was just wonderful,  subtle and touching in a quiet, effective way.

After the intermission we had another treat. Another  1804 tragedy called, AARON  Starring,
Felix J. Mayes as Aaron Burr (Handsomely attired with silver heals to die) and Mateo d'Amato
as Alexander Hamilton. a life long rival of Aaron Burr. (quiet effective in an intense role)

This play was nothing if not a great history lesson.  Listening to the speeches of Alxander Hamilton
one suddenly realizes that not much has changed in such a long time.  He keeps blatantly tries to
Insult Aaron Burr who is so confident in his ability and sense of justice that he laughs away the insults most of the time thus making Hamilton so furious that he challenges Aaron Burr to a duel from which Hamilton dies a short time later.

BACK is written by Mickey Bolmer and developed with poetic Theater Productions and directed by
Andrew Willis-Woodward.

There are other characters such as Nan Goldin, Bernice Abbott, Walt Whitman and David Wojnarowicz.  The whole ensemble is really good and they work very well together but outstanding performances are given by, Olivia Nice, Adam Wennick, Bello Pizzimenti and Mateo d' Amato.
The whole evening was thoroughly enjoyable and informative. Costumes were also very beautiful and festive. My friends who happened to be from Berlin and accompanied me to the show on their last night in NewYork Loved the whole evening.

I felt very nostalgic for the old times and for the fabulous dead.

I congratulate the Co-Artistic Directors' Jeremy Karafin and Alex Mallory of  Poetic Theater Productions for staging such a wonderful and important work.

Posted by arts international at 8:21 AM