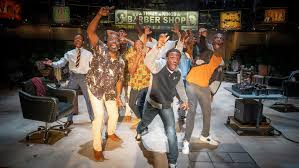 for men.  They can't wait to get there and beside having their hair cut enjoy an amazingly relaxed,

Theater, a big hit which has been traveling in Britain and now in United States is a testimony of the

real barber shops and what takes place there.

This production has the incredible energy of a fast moving traveller without a pause.  The set is vast and fluid, the actors are on  cocaine high energy, they dance, they sing, they laugh, they entertain, they cut hair, they move their barber shop moveable chairs fast and furious to make the play move to
a different location without any other change of scenery and make it absolutely effective.

When the show hasn't begun yet, they actually begin entertaining, welcoming audience members to be part of their play.  They invite them onto the set, they take selfies, they make them sit on their chairs and mime cutting their hair.  A very welcoming and comforting gesture and we the audience members are instantly involved.

The whole company is totally relaxed and are a great fun even when they express many episodes of pain which can give any body a pause but everything is handled with great poetry, song  and movement.

When the show opens, they are in Lagos, Nigeria and its 6am.  A customers knocks and knocks
and wake up the barber and kind of order/request for the finest haircut like a car speeding in a race.
When it comes to pay, he says, "I am short of cash." He gets chased and then let go...

The scene moves to  other locations, like London, and five other cities in Africa.  There is
a clock on the wall which informs us of different time zones and every time the scene changes there
descend a sculpture made of wire and beautifully lit in magenta blue depicting a different part of the globe and the actors move with great energy and thrill with the hip-hop music in the back ground.

The play is not only a dance and the movement piece taking place all over Africa. It's a very deep and complex tale of culture, language, relationships and tradition of the people who live there, who migrated to the West, people who came back, people who never came back but never escaped their past, never forgot their language, never stopped missing their culture and their language.

The amazing thing about the Barber Shop Chronicles' is how easily the customers and their barbers
discuss the intimate stories of their lives.  Them traveling to the foreign countries, their love and lack of love from their fathers, their ambitions and dreams, their unending pain with such humor, with such gossipy feel, with such ease that it's so fluidly and smoothly gets into our consciousness and we feel for them and want to sing and dance with them as well.

The ensemble seems like they are all travelers and where ever they go they take their stories with them and are looking for an audience and the Barber Shop becomes their audience.  It's that intimacy of the same culture and language and customs which make them open up and talk about any thing and everything.

They discuss politics, a must, their leaders, Mandela, a father figure in the culture of missing fathers, they make fun of their language as well as are very proud of it, they talk about going abroad, making a dream come true, escaping their past and realize at the same time that they can never escape anything inherent in their genes.

It seems a heavy play but it's not at all.  That's the beauty of it all.  Incredibly important topics are being talked about, gossiped about, migration is discussed, the difficulties of leaving home, coming back, never coming back, all is being talked about but we never feel the heaviness of all that.  It
never seems like a serious tragic loss.  The greatest success of this play is that with the serious depth of its complexity it's the most fun, fast and furious play in its entirety.

There is a very funny sequence about how in the West the importance of time has been valued, how every bit of time has its own schedule but in Africa when one is supposed to arrive at 1pm, it's normal to arrive at 3pm.  How true that is in South East Asia as well. People are surprised when anything starts on time.

Barber shop is superbly directed byBijan Sheibani and the movement director, Aline David has done
a great job. A wire model of earth lit in a blue light and suspended from above is by genius, Rae Smith.

artsinternational.blogspot.com
binashariff@gmail.com
Cell: 212-260-6207
.www.facebook.com
Posted by arts international at 11:01 AM