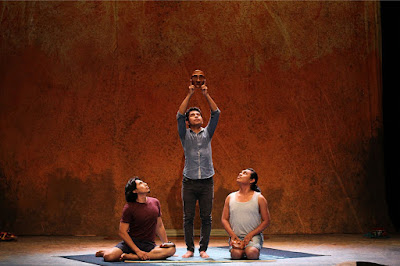 ANDARES: PART OF UNDER THE RADAR THEATER FESTIVAL AT THE PUBLIC THEATER

ANDARES is an exploration of the mythic past and difficult present of Indigenous people of Mexico,
created by Makuyeika Collective Teatral and conceived and directed by Hector Flores Komatsu.

ANDARES is performed in a very sensitive and tender manner with song and dance on a bare stage with a very few props such as a few masks, and beautifully colorful ribbons in the shape of a hat/mask. The minimalistic approach to this mythical and ancient fable is very effective.

One by one the performers narrates in a moving manner about their cultural beauty being threatened by the modern contemporary forces of destruction.  There are ancient stories about how gods of fire created peace, calm and beauty which turned into nasty and destructive forces called human beings.

There is a narration about a stag's eyes full of tears and weeping about the memory of the beautiful forest in which he roamed freely  and was his dwelling which is now no more.  That bit was the best part of the show taking us back into the calmness of nature which is turned into cement and steel in
the modern times and even its memory is weeping.  Imagine! how sad the image of that haunting memory can be?

The whole show is spoken in Spanish with very clear super-titles which really helps .
There are tales of parents, grandfathers and animals.  The Mayan culture has as much respect for animals as for the humans and that is very touching. There is also the confusion of a young man
about the power and control of patriarchal society and his recollection of being a male who dresses as female by his deep desire and inclination.

The actors, Jesue Maychi, Domingo Mitangos, Lupe-de-La-Cruz and Guitarist- Raymundo Pavon-Lozano are very effective. The best thing about them is that they are extremely calm and natural
and that makes the whole experience very moving.