"NOT I" BY SAMUEL BECKETT UNDER THE RADAR AT BRICK

"NOT I"
by
SAMUEL BECKETT
AT BRICK, BROOKLYN
PART OF UNDER THE RADAR FESTIVAL

"NOT I" . Is one of the most challenging and complex monologue written by the great playwright
Samuel Beckett.  Beckett's language and his meticulous directions are so precise that it's even hard
for very accomplished actors to follow and Jess Thom ( wonderful performer) has Tourett's Syndrome which is a neurological condition and the person suffering from it can not control verbal
and motor tics, so Thom throughout the 12 minute monologue often incorporate words such as, "Biscuit" to control her verbal tic.  She thumps hard on her chest every time she utters that word without disturbing Beckett's language. The flow of the word, biscuit has a very different speed and once she resumes Beckett's words she resumes the high speed which the monologue requires and the result is absolutely brilliant.  Jess Thom is such a presence and is endowed by special skill and an enormous gift to handle the writing of Beckett which is never completely easy but she is extremely brave in the doing of it . Thom adds such an enormous effect to Beckett's strong and mesmerizing
words.

What a monumental effort for any actor but especially for Jess Thom.  This role written for  Mouth requires vocal, emotional and physical energy and a tremendous  skill and Thom deals with it head on.

The director Mathew Pountney has to be congratulated for trusting the talented Thom and taking a chance and giving us an un-forgivable experience. The performance is also signed for the deaf. 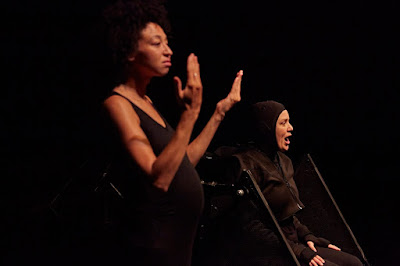 At the talk back after the show Thom revealed that it took her one year to master the role and to reach
the level of vocal speed required by the author.  She has amazing energy, powerful voice and a great sense of humor.  This play should give every actor the hope to surpass all kinds of obstacles in the theater.  Actually not only the play but Jess Thom is the marvelous example to overcome tremendous
odds because of her skill, determination and will power.
"Not I" . is the highlight of under the radar festival.