TRUTH HAS CHANGED UNDER THE RADAR AT PUBLIC THEATER 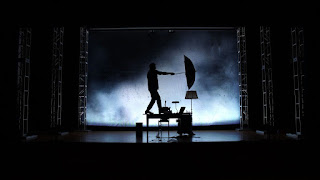 TRUTH HAS CHANGED is a solo piece written and performed by Josh Fox.  Josh Fox is a documentary film maker and an activist.  His film won an award at the Sundance film festival.
Documentary is called "GASLAND"

Truth has changed is about the misinformation and the propaganda spread by the media, corporations,
politicians and advertisers. Josh Fox focuses on Face book and  Cambridge Analytica and doesn't have any thing nice to say about them. He presents a short film in which Mark Zuckerberg avoids
questions asked by the Congress woman Alexandria Ocasio- Cortez.

Truth has changed is extremely dense show.  It starts when the actor was part of a protest against fracking
at the Delaware river when a young student asked a question, "How do we know the truth?"
I guess the student's question was really profound because there are always so many conflicting stories and opinions about all kind of news which eventually become exhausting and one just
gives up.  Mr. Fox's show also has far too much information in it about so many topics such as
fracking, oil spills, 9/11, Iraq war, climate change and 2016 election.

After a while one can't absorb all the disturbing information which we are already familiar with.
It also has racism, corporate greed and a big section is about the digital technology and because
of that all the people in the world are part of a data and no one has any sense of privacy left.

Mr. Fox is a passionate performer but for this show which is more about journalism than real drama
his passion seems a bit much. There is a long sequence when Mr. Fox starts to dance under an
Umbrella making believe it's raining, like Gene Kelly and it seems over-dramatic.
His intentions are really sincere and its admirable to inform the public about misinformation of all kind but most of us are already suspicious of the information we get about the most serious events happening in the world but perhaps its a good idea to be reminded again even if its very difficult to
handle.

Posted by arts international at 12:44 PM