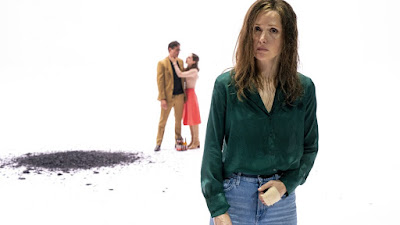 The play opens on a very bright white set which has white walls, white spotless floors and not a hint of any furniture.  The two children, Gus (Orson Hong) and Edgar (Jolly Swag) are on stage playing
with their phone and iPod.

In this modern version of Medea, Anna (Rose Byrne) a skilled scientist has just returned from mental
Institution after spending almost a year there because she had been poisoning her husband Lucas (Bobby Cannavale) who had been cheating on her by having an affair with Clara (Madeline Weinstein) the daughter of his boss Christopher (Dylan Baker) to advance his career.
Anna has already helped her husband Lucas who worked in the same lab and is a scientist as well but not as advanced as his wife and she feels totally disrespected by his dismissiveness.
They are now divorced and Lucas has the custody of his two sons Gus and  Edgar

After Anna is back from the hospital and behaves pretty much in control of her plight decides to spend the night with her children and her husband.  The children are making a documentary about their home life and we see mostly Anna's close ups on a big screen above the stage. They end up making love and Clara finds out and is very upset and her father wants Lucas to right the wrong by making Clara pregnant.

Husband and wife bicker and fight and yell and scream at each other like many married couples whose marriage is gone sour.  Anna finds out that Clara is pregnant  and wants to take revenge.

In the meantime black ash keeps falling like black snow flakes from the ceiling and covers the
immaculately white floor, (Poetic image of coming doom)

Both children play as normal children would with anything even ash and throw handful at each other
running around and enjoying that moment of fun which won't last very long for sure.  Both actors
Jolly Swag and Orson Hong are wonderful.  Actually they are the most watchable in their innocence
and playfulness even under the difficult atmosphere they are in.

Rose Byrne and Bobby Cannavale are like any other husband and wife whose marriage is falling apart for what ever reason and thus doesn't evoke the terror which has been experienced in Euripides
Medea. The last act by Anna of burning the house with her children in it is based on a real event which took place in Kansas city in 1995 in which a woman named Deborah Green who put fire to her house and killed her children.

Though its always a good idea to go back to the classics and re- evaluate them but then the power
of the original has to match the power of the modern versions.  Though this Medea is a very good script and well acted by the actors and well designed, it just doesn't evoked the horror of the suffering
of the ancient mother.  It's not the fault of the writer/director.  we are in different times, there are so many horrors of so many different kinds that perhaps we have become numb to the grief of others.
There is another factor of our being a little distanced from Anna's tragedy because from the very beginning it's established that she is mentally disturbed and it's assumed by many that a mentally disturbed  person is capable of lot of harm and perhaps must not be left alone with kids and should be better supervised.  But still no excuses are enough.  The death of innocent babes by the hand of their own mother is a vast tragedy and we should be more vulnerable to the plight of women who suffers
from it or any one else who has the misfortune to go through it.

This Medea raised more issues of mental illness for me than the abandonment and betrayal of
Euripides Medea who left Colchis, helped Jason retrieve the golden fleece, became a refugee in Greece, after bearing two sons was being exiled by Creon, the king of Corinth because Jason wanted to marry Creon's daughter to improve his station in life.  Medea was crushed, hurt, humiliated, abandoned and wanted to take revenge against Jason without ever contemplating the eternal loss of her own children.  In murdering her children does lies madness as well, so in the deep analysis of
both plays, both women are for sure mentally disturbed.  In this regard it was very good of Simon Stone to dig down the real cause of this unbelievably scary tragedy and come up with a brand new
Medea after Euripides.

Posted by arts international at 7:15 AM