DRACULA AND FRANKENSTEIN AT CSC

DRACULA and FRANKENSTEIN at CSC 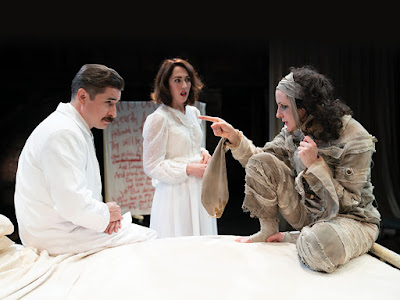 New adaptations of two great novels of Gothic literature, Dracula by Bram Stoker and Frankenstein by Mary Shelly.
Dracula is being adapted by Kate Hamill and it is not such a scary tale as the original but a melodramatic, comic, witty take of feminist revenge on patriarchy.

Count Dracula (wonderful Mathew Amendt) swagger around in Transylvania in a lavish long white coat sucking people's blood turning them into vampires and his slaves for ever.  He has two beautiful women slaves ready to attack any new victim and here arrives Jonathan Harker (Michael Crane)
a lawyer to make arrangements for his client count Dracula to move away from Transylvania to England to find new victims.
He is quite hapless and is soon seduced by the count.  He has a pregnant wife back home, Mina (powerful Kelly Curran) who is a good friend of Lucy (Jamie Ann Romero) who sadly becomes the new victim of Dracula and Mina is totally at loss of Lucy's new illness.

Kate Hamill herself takes the role of Renfield, a deranged woman who is in a mental institution
and recites poetry, keep announcing the arrival of Dady.  Kate Hamill is excellent and very funny
in her bandaged outfit and battered eye make up.  We eventually find out who the, "Dady" is.
SomehowI found her wait for her Dady hilariously funny and cracked up every time she mentioned it.
Doctor Seward (Mathew Saldivar) who is engaged to Lucy and is in-charge of the institute is at a loss
about Lucy's illness and that's when a Vampire expert cowboy doctor Van Helsing (Jessica Frances Dukes, an amazingly powerful performer) takes over and convinces Mina to take control of her own destiny.  Mina and Dr. Van Helsing will eventually will become a two women team and deal with patriarchal power men have over women for centuries.  She wants Mina to be bold, assertive and convinces her to stand up for herself.

The last part of the play becomes a battle of sexes like fight mimicking an action movie scenario
and we do know who is going to be the winner here.

It's a wonderful production with many familiar laugh lines which takes away from the fear of the horror we came to see. Not very scary at all but totally funny, light and enjoyable.

The costumes by Robert Perdziola are refreshing and beautiful.  The lighting design by Adam Honore
is very effective and the sound by Leon Rothenberg is haunting and creates an atmosphere which can make you shiver in your seat.

I enjoyed the script by Kate Hamill and the direction by Sarna Lapin.  The direction is clean and fluid
on a bare stage.


FRANKENSTEIN
Tristan Bernays adaption of one of the most famous novel by Mary Shelly is also sharing the bill with Dracula.  Frankenstein, directed by Timothy Douglas and is performed by Rob Morrison who is on his guitar and assume some other roles later on.  Stephanie Berry, a very powerful actress who is blessed with an amazing stage presence plays the doctor Victor Frankenstein who creates the monster and the monster as well.  This double role some times becomes confusing but still doesn't take away from the mesmerizing ability of the actress.


The beginning of the play is like a silent performance piece except some vague sounds of the guitar
when the monster is born and is trying to breath life into herself,  Stephanie Berry tries to move her limbs, tries to take some steps, smells some herbs, eat some berries, picks up a book, tries to learn some words and then eventually with the help of an audience member slowly pronounce the word, "Frankenstein" From then on there is a quick transformation of the character into a poet and a scholar.
That transition is un-nerving.  The creature asks fundamental question from her invisible creator about why was she created in such an image? Eventually the monster becomes violent and goes on a killing spree after she leaves the laboratory.  The play is very serious and has a metaphorical element to it. When people who look different, even scary to the ones who call themselves normal and are totally afraid of the otherness of, "Others" are also born by the same creator, one and only creator for all. But the so called normal beings forget that part completely and that question which is very complex is subtly being raised here.
The question is complex and not very easily answerable. it's like saying, "God created me and god created you and we are both so very different and whose fault is it?  And what should be done about it?"
The play might not be as enjoyable like a comedy but we are not watching a comedy.  We are witnessing something human and horrible at the same time.  Very timely. society is like that and had been for some time.