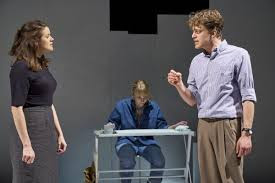 SISTER CALLING MY NAME is a memory play and the memories are hauntingly sad.
Brother Michael (John Marshall) recalls the most painful episodes of her sister's mental illness.
Sister Lindsey (very effective Gillian Todd) is now being taken care of by sister Anne Frances
(Susie Duecker) who once was Michael's girl friend.  Michael was madly in love with her but she
was very deeply into god and always believed in hope and the power of redemption.

Michael's only sibling, his sister Lindsey was mentally ill and was hospitalized.
Lindsey was consumed with love for her brother and was always thinking of him and calling for him.

When the play opens Lindsey is being taken care of by sister Anne Frances who is extremely tender and kind to her. She is helping her to paint pictures because Lindsey has that hidden and incredible
talent of an amazing artist and sister Anne knows how to tap into that with the power of prayer, hope
and belief in her faith. There is a lot of emphasis on the positive purpose of creation of human beings
by god.  Everyone has a gift, talent and a hidden purpose and reason to be here, no matter the stress,
the misfortune and the illness.  Life is breath and breath is life and as long as we have breath we have
to be positive under all circumstances and believe in our creation and hope for the best.

Play is being told in flashbacks and Michael at this point has lost his parents, his girl friend and all hope as well.  He is disillusioned and has to face lots of loss and the severe mental illness of his sister whom he loves deeply but wants to not face it.

Lindsey is being very productive at this point with the help of sister Anne Frances and she paints
beautiful pictures constantly and is being sort out for exhibitions.  She is very pleasant and is always
saying that she is painting these beautiful pictures for Michael.  It's very touching, her love for her brother. Sister Anne finally reaches Michael and wants him to get involved in promoting her art and
face the facts that she after all is his sister and the love and the blood bonds of real family can never vanish and must be dealt with.  Eventually the play becomes a force of redemption and hope under all
difficulties of suffering, pain and sorrow,

The play is very poetic and sad.  The actors are all very capable but I was very fond of Gillian Todd as Lindsey. She was totally believable in her smiling demeanor and the flashes of her violent illness.
Susie Duecker as sister Anne was very pious and humble and tolerant and because of her faith, her patience and her power of prayer, the possibility of redemption was possible.  John Marshall as Michael had a very painful journey and he travelled well.

The play is not very easy to watch and is disturbing and that's how all art should be.  We should be
challenged and provoked through the healing effects of art which comes eventually.
I am glad that I got to see, SISTER CALLING MY NAME.
The play is a co-production of Blackfriars Repertory Theater and Sheen Center.

Posted by arts international at 7:03 AM