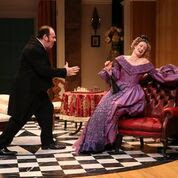 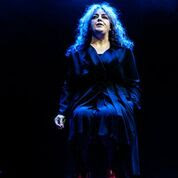 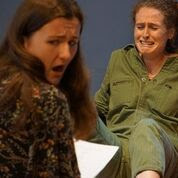 ORIGIN 1st Irish Theatre festival just ended after it's glorious one month run in various venues
in Manhattan, queens and long Island. This is not only a fascinating theatre festival but a very important one as well.  We are fortunate to see wonderful original productions of new and raw
materials by aspiring writers, directors, designers and actors from all over Ireland and from the world.
How fortunate for us to be dealt with such a treat.

I wasn't able to catch everything the festival offered but the plays I saw were deeply engrossing
and left an impression with me that the most important thing in life beside having good health is the
arts in all its form and especially theater.  Some time you don't know what to expect and then you live with the beauty, the revelation about something scary, something mesmerizing and even painful and you leave the space with a different mind set which enhances your own sensibility, your own inner
beauty and sorrow.  And the shows I saw dealt with all that.

I saw the ROUND ROOM by HONOR MOLLOY, not only a superb playwright but a wonderful
poet as well.  Her play takes place in the wards and corridors of a maternity hospital ROTUNDA HOSPITAL in DUBLIN and its about the childbirth of various women mostly poor and desperate over the Centuries. Molloy was very fortunate to have extremely talented actresses who in a limited studio space and the production which is in development process made us forget that this is work in progress and is as good as any finished product in any theater big or small.  The space was perfectly used and there were movements as fluid as a dance.

The highlight of ROUND ROOM was also SUSAN McKEOWN,  grammy award winner Irish singer
and songwriter who had the voice of a nightingale who provoke sensations of stirring ancient times gone by and its pain, sorrows and regret in a dirge like sensation which gave me the chills.  I am still hearing her.  I am so thrilled to know that Molloy won the award for the best playwright.
I would like to see this production again a few more times.

Another highly recommended, profoundly moving and touching the depth of your soul play was
SCOURGE written and acted by MICHELLE DOOLEY-MAHON produced by Wexford arts
and Irish Rep.  The play is about the relationship of mothers and daughters at the times when both need each other.  In SCOURGE, which is about Michelle's own life story about her mother
being in the nursing home with dementia for seven years where the daughter diligently and with great tenderness takes care of her.  The mother never moves ore talk and the daughter feed her, changes her clothes, and put her to bed.  She has all the patience to do this great deal with affection for seven years.
Michelle Dooley Mahon is one of the most brave actress and writer who opens her soul and heart for us and we feel everything she is going through all along. It created lots of pain in my own heart because my own mother passed in an other country oceans apart...without me.
The play is amazingly directed by BEN BARNES, a highly imaginative director from ABBEY TEATER.  I love his concept of using a doll as the mother figure and the tenderness which the actress showed to deal with it was extremely powerful and touching. I am still thinking about the writing and acting of Michelle.  This is what good theater does for you.  Make you feel, think, laugh and cry.
MICHELLE DOOLEY MAHON won the special Jury prize and I am very happy about it because she really deserved it.

I also saw LONDON ASSURANCE at the IRISH REP directed by incredibly talented CHARLOTTE MOORE.  It's a comedy of manners, a farce very well designed with wonderful period costumes and well acted by the whole cast.  The play was written by DION BOUCICAULT, most prominent playwright of 19th century.  He was also an actor and a director.  London Assurance was produced
at Covent Garden in 1841.
The play is about the upper classes with all their spoiled dissatisfaction with life and the wonderful
things they have.  It deal with identity confusion, romance, mystery, intrigue, love triangles and perfect resolutions which work for every one at the end.  It was throughly enjoyable.

The whole ensemble was good but I particularly liked Rachel Pickup as Lady Gay Spanker and  Colin McPhillamy as Sir Harcourt Courtly.  Rachel Pickup got the best actress award, a great choice.
Charlotte Moore won the best director and the play got the best design as well.

I just can't go away without mentioning the most heart wrenching film called NUALA about
Nuala O'Faolain, a great writer who became very well known all over with her memoir, ARE YOU SOMEBODY?. The film is beautifully shot and is immaculately narrated by Marion Finucane,
a radio show host and a childhood friend of Nuala. Once you see this film you will never be able to forget it. A MUST SEE.
WRITTEN
by
BINA SHARIF
artsinternational.blogspot.com
binashariff@gmail.com
Cell: 212-260-6207
Facebook.com


Posted by arts international at 10:14 AM