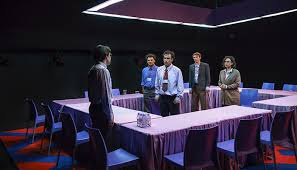 Bonobo is a Chilean theater company founded by Pablo Manzi and Andreina Olivari.
Their goal is to create plays which deal with the discrimination of ,"Otherness"
They create their work collectively and their approach is experimental with emphasis on improvisation. Their subject matter is often very serious but has incredible humor in it and all of that is in their new work TU AMARAS.

A group of medical doctors are getting ready for an international conference trying to explore how to deal with others who are different and at times assume the role of the enemy in modern societies even in today's democratically oriented societies thus creating great animosity and hatred towards others who look different, behave differently and perhaps speak a different language.

These doctors unexpectedly also have to deal with aliens who have landed on earth to avoid genocide
and it disturbs their method of working, their research and their way of presenting their material
at the conference.  They start to explore their own racism and prejudice towards others who might
occupy lower income status or utter an un-pleasant word and thus the excuse for violence, even murder. Doctors tease one of their fellow participant that he looks like a rabbit and the word is repeated so often that it becomes a source of their hilarious amusement. The guy who is being called a rabbit is so enraged that when he hears this sentence again, "You look like a rabbit" by a taxi driver that he ends up murdering him. All these scenarios are created with great humor.
The play is unusual but deals with the most important topic, racism, otherness and prejudice which
is sadly prevalent even now in 21st century. Excellent presentation loaded with hilarity.
Keep an eye out for bonobo.

artsinternational.blogspot.com
binashariff@gmail.com
Cell: 212-260-6207
facebook.com
Posted by arts international at 7:39 AM